July 13th:  Sarah of the Nile (370)  She became an ascetic as a young woman and struggled against her temptations for sixty years along the Nile River.  Many women saw Sarah’s example and also became nuns.  Nine lessons in the Sayings of the Desert Fathers and several in the Matericon are attributed to her.

July 14th:  Hellius (4th century)  An Egyptian monk who was known to perform miracles and look into the hearts of men.  Among his struggles, Hellius had to overcome satanic delusions when fasting.  The devil sought in vain to tempt him with various sweet foods.

Heraclius (246)  Patriarch of Alexandria from 232-248.  Former head of the Catechetical School of Alexandria and ordained 20 bishops.  Heraclius was the first to be called “Archbishop and Pope.  (this information is from Orthodoxy in Africa by Archimandrite Chrysostom Onyekakeyah)

July 16th:  Julia the Virgin (440)  Julia was born in Carthage and taken as a slave when the city fell to the Persians.  Her Syrian master didn’t make an issue of her Christian faith and found her trustworthy.  On a trip to Corsica, she was discovered not celebrating a pagan festival.  Despite her master’s objections, angry pagans tortured her, cut off her breast, and crucified her.  Julia was buried by monks on the island of Margarita.

Commemoration of the First Six Ecumenical Councils  done on the Sunday between July 13th and 19th.

July 18th:  Pambo (ca. 386)  An Egyptian ascetic on Mt. Nitra and contemporary of Abba Anthony the Great.  Pambo was known for not speaking an unnecessary word and eating only the bread he earned by his own labor.  It is said that Patriarch Theophilus visited the monks on Nitra.  they begged Pambo to say something edifying.  He replied, “If he does not benefit from my silence, he will not benefit from my word.”  Fourteen lessons in the Sayings of the Desert Fathers are attributed to him. 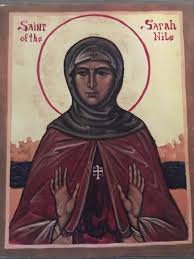 “Is it true that you want to be saved lying down?  No, remain in stillness; be silent, keep vigils; fast, weep, and perhaps God will have mercy on you.  One who does not toil here will suffer there, in the unquenchable fire, together with the demons.”   Ammah Syncletica, from the Matericon

“Be watchful inwardly.  Be watchful outwardly.”  Poemen the Shepherd, from the Sayings of the Desert Fathers