African Saints (from the Prologue of Orhid):

March 24th:  Zacharias the Recluse of Egypt (4th century) – The son of Abba Carion.  Though younger than most other Desert Fathers, Zacharias was honored for his wisdom.  Five of the Sayings of the Desert Fathers are attributed to him.

March 27th:  Paphnutius (4th century) – A disciple of Anthony the Great.  Paphnutius was known for leading sinners to repentance.  Six of the Sayings of the Desert Fathers are attributed to him.

March 29th:  John the Hermit (4th century) – The son of a Christian woman, Juliana, in Armenia.  He fled to the Egyptian wilderness and was spiritually guided by Abba Pharmutius. 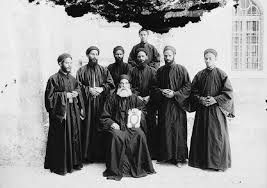 “No one ever sees a person who fast with discernment enslaved by evil lust, but one who scorns fasting is mocked by the demon of fornication.” — Abba Isaiah to Abbes Theodora, Matericon, Spiritual Instructions #147