African Saints (from the Prolouge of Ohrid):

May 27th:  Theodora and Didymus the Soldier (304) Theodora was a virgin in a noble family.  She was found to be a Christian and sent to a brothel to be violated by soldiers.  An answer to her fervent prayers to God, Didymus was the first soldier to enter the house.  He too was a Christian and dressed her in a uniform while he wore a woman’s garment.  He was arrested and admitted his faith.  As he was about to be killed, Theodora came up to try to take his place.  They were both beheaded and their bodies burned.

May 29th:  Commemoration of the First Ecumenical Council (325) The Council was held in Nicaea to settle the debate of Christ being of the same nature as God the Father.  Arius, a priest in Alexandria, started the heretical teaching that Jesus was a created being.  The council led by the young Deacon Athanasius confirmed Bishop Alexander’s condemnation of the Arianism.  Among the clergy present was Cecilianus of Carthage.

Archbishop Alexander of Alexandria (326) condemned the Priest Arius for teaching that Jesus was a created being.  Arius appealed and his case was the main item of the First Ecumenical Council in 325.  His close assistant, Athanasius, succeeded Alexander.

May 31st:  Martyr Philosophus (252) The young man was born near Alexandria and suffered many horrible tortures rather than renounce the Christian faith.  His tormenters, learning he was a virgin, tied him to a bed and brought in a prostitute to have sex with him.  When she got close and touched him, Philosophus bit his tongue off and spat the blood in her face.  The harlot screamed and fled from him.  He was soon beheaded. 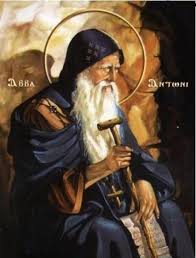 “Let us enter into our cell, and sitting there, remember our sins, and the Lord will come and help us in everything”  Abba Poemen (the Shepherd) from the Sayings of the Desert Fathers